Home  /  Museum of the Academy of Arts

Museum of the Academy of Arts

The Museum, founded in 1758 by I. I. Shuvalov, has a unique collection of Western European and Russian art. Since the second half of the 18th century, the collection served for educational purposes to train students of the Academy of Arts, many of whom later became known as outstanding figures in Russian art of the 18th-20th centuries.

The Academy of Arts had been collecting paintings and drawings by Western European masters, as well as casts of famous ancient and Western European sculptures, in order to use them as models for drawing in the “plaster heads” and “plaster figures” classes. The building of the Academy of Arts was designed by two teachers of the Academy’s architectural class: Alexander Kokorinov and Jean-Baptiste Vallin de La Moth, and built in 1764-1789, representing an outstanding monument of early Russian Classical architecture. Russian painters and sculptors of the 18th-19th centuries, when decorating the state interiors which currently house the Museum of the Academy of Arts, embodied the idea of the importance of fine arts in the life of enlightened society and in the fate of Russia, and tried to convey the idea of a high purpose of their vocation to the young generations of artists of “the Three Noblest Arts”. The Academy’s family chapel, the Raphael and Titian halls were decorated in the 1830s to a design by the architect of the Cathedral of Christ the Saviour in Moscow K.A. Thone, who was the rector of the Academy of Arts in 1840-1850s.

The main exhibitions of the Scientific Research Museum are displayed on three floors of the internal concentric building of the Academy — “the circular”. The galleries which encircle the inner circular courtyard of the building (55 meters in diameter) serve as a unique exhibition space.

The Department of Plaster Casts occupies the ground floor; on display are the 18th-century cork masterpieces of antique sculpture and models of architectural monuments of antiquity made at the workshop of the Roman architect Antonio Kiki. The collection is second to none in terms of completeness and artistic value: large number of the represented casts were molded from the original works in the 18th century.

The permanent exhibition on the second floor is entitled the Academic Museum and presents paintings from the museum’s historic collection; these are the works by famous artists whose canvases were widely used by many generations of the Academy’s students as models for studying and copying. This concept follows the principle behind the arrangement of the permanent exibition of the Museum of the Imperial Academy of Arts until 1917: in the halls “along the circular” on the second floor, where the Picture Gallery and sculptures were located, along with the best “course” paintings of Russian painters (works on given subjects, for which the authors received gold medals, artist, academician or professor title) works by foreign masters were also represented. The exhibition ` St Petersburg Architecture of the 18th-19th centuries in models, drawings and sketches`, located on the third floor, displays works by prominent architects of the past. Of particular interest are the unique models of famous architectural monuments of St. Petersburg such as the Smolny Monastery, St. Isaac’s Cathedral, Mikhailovsky Castle, the Stock Exchange and others. (For more information about the main exhibitions see the What’s On section of the website).

Exhibitions of works by Russian and foreign artists are held regularly in the state halls of the Museum; it has become a tradition for the Academy Museum to host exhibitions of Summer Internships and Diploma works by students of the I.I. Repin Academic Institute of Painting, Sculpture and Architecture, and the Spring Exhibition, which presents works by the Academy’s teaching staff.

Along the facade of the Academy of Arts that faces Neva river is a suite of state rooms: the Raphael Hall, the Conference Hall, the Titian Hall and the Catherine Hall. Main features of the architecture and decoration of these halls were determined by their ceremonial and “representative” function in the interior system of the Academy of Arts.

The original design of these rooms was introduced by A.F. Kokorinov and Jean-Baptiste Vallin de la Mothe. It is represented in the model of the building displayed in the exhibition of the museum’s Architectural Department but, as a matter of fact, it was not fully implemented. The halls were reconstructed twice in the 19th century. In the late 1820s, the current President of the Academy at that time Alexander N. Olenin, comissioned the architect Konstantin Thon, who had just returned from a trip abroad, to finish the rooms that had been left unfinished. According to the project, all the state halls of the Academy were to be decorated with finishing and partially reconstructed in order to adapt them to their new function. The double-height halls were turned into “antique galleries”, where a large collection of casts of antique sculpture was displayed. The ceilings in both galleries were designed as complex sculptural relief compositions with floral ornaments and stylised images of the attributes of art. In the mid-19th century copies of works by famous Renaissance artists were on display at these galleries, and eventually the halls recieved the names Raffael and Titian. K.A. Thon’s reconstructing project also included the completion of the central domed hall. In 1833 it was decorated with paintings by V. Shebuyev. All the works had been completed by 1837. In the 1860s the central domed hall was reconstructed for the second time by the architect Alexander Rezanov; since then it was used as a conference hall for various celebrations and meetings. It is in this hall where the students of the Repin Institute defend their thesis nowadays. This reconstruction, as well as the first one supervised by K. E. Thon, has hardly distorted the original plan by Kokorinov and Vallin de la Mothe. The general proportions of the hall remained intact, and the only major change influenced the round columns along the walls: they were replaced with flat pilasters. A. Rezanov added niches with sculptures in the second level and included portraits of famous Academy professors in the composition of the hall. The latter decoration design has survived, more or less, until the present day. 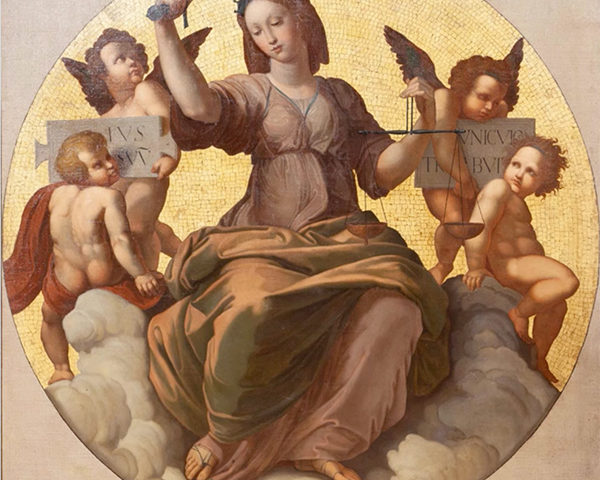